Posted on December 5, 2019 by Jim Burke, Special to Montreal Gazette 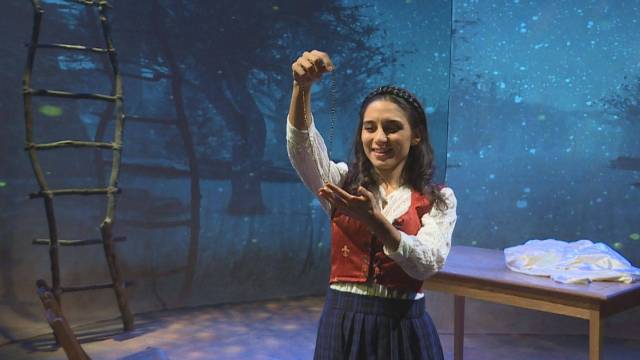 Tableau D’Hôte Theatre follow up their excellent production of Marc Prescott’s Encore last spring with another tale of love surviving through life’s bitter trials. Here, the circumstances are considerably more taxing than in that previous, often sunny and charming play. The rural characters in Winter’s Daughter are caught between an immediate past of the catastrophic Great War and a dark future of burgeoning Italian fascism. The immediacy of a devastating personal tragedy leaves them bloody and bowed, yet perhaps strengthened for the horrors that lie ahead.

What with a vision of winter that’s more forbidding than seasonally jolly, Jesse Stong’s new play is a grueling, sometimes morose 80-minute family tragedy. Yet there is a glimmer of hope, not least in the fact that hanging over it all is the awareness that it’s based on the family history of celebrity Montreal barber Gino Chiarella (and inspired by K. David Brody’s short story, The Peddler’s Daughter, itself inspired by Chiarella’s history). That Chiarella is around to tell his tale, or at least to sanction its telling, is testament to his great-grandparents’ tenacity in nurturing a kernel of life through that real and metaphorical winter of the play’s events.

Set on a remote farm in Calabria in 1919, Stong’s play sees Giuseppi, still traumatised by his experiences in the trenches, and his wife Maria trying to raise their child in the hardscrabble circumstances of living off an unyielding land. The couple give shelter to an itinerant Jewish peddler through the winter and, when his calling compels him to take to the road again, offer to look after his little girl, Rina, until he can return. The peddler is reassured by the genuine goodness of these two strangers, and by the presence of their own little girl, Rosaria.

In a cruel twist of fate that has echoes of the darker type of fairy tale, the couple find themselves faced with a decision which has rippled its repercussions down to the present day.

Director Emma Tibaldo has assembled a strong cast, with Michaela Di Cesare (who’s also a META-winning playwright) playing Maria, initially as a playful, almost frivolous young woman before life leaves its scars. Ryan Bommarito, who recently won an outstanding lead acting META for his performance in Segal’s Indecent, gives a convincing portrait of a man who, despite his soul having been pulverised by war, forces himself to function for the sake of his family. Amir Sám Nakhjavani finds a nice contrast in the dual roles of the reticent peddler and a vivacious friend of the family. And Alice Denton, playing both Rina and Rosario, provides a haunting, silent presence throughout.

Lara Kaluza and Zoe Roux’s designs for, respectively, costumes and set evoke the earthy pastoral setting with just the right touch of the picturesqueness of bygone days. The visuals, though, are dominated by Jaclyn Turner’s projections of a real and psychological wintry hinterland of constant snowfalls, threatening birds and strangely shifting black blots that resemble collapsing stars.

It’s hard to say whether these remarkable images complement or contrast with Stong’s straightforward approach to storytelling which, while vigorous in its directness, sometimes feels a bit denuded of the poetry from which this story arguably might have profited. There are occasional stylistic flourishes, such as Maria’s recurring telling of a fable involving migrating birds, and a sequence or two of ritualistic physicality. And Stong sometimes goes beyond the circumscribed lives of the characters to hint at the dark social forces that would soon reach even the remote outposts such as Maria and Giuseppi’’s farm.

But it feels like an opportunity missed to not somehow work in the more recent circumstances of Gino Chiarella’s life (a past-meets-present technique which Hannah Moscovitch’s Old Stock: A Refugee Love Story managed beautifully in this very space this time last year). It’s that context, after all, which makes this story so potentially compelling for a Montreal audience.

Still, the company is to be commended for seeing Winter’s Daughter through to such a polished production under straitened circumstances — not as harsh as life on a farm in wintry Calabria circa 1919, perhaps, but the fact that Tableau D’Hôte struggled through a dearth of arts council funding to forge ahead with such a handsomely-mounted, solidly performed and heartfelt production makes this an admirable achievement.

Theatre writings by Jim Burke, Montreal-based playwright
View all posts by Jim Burke, Special to Montreal Gazette →
This entry was posted in Uncategorized. Bookmark the permalink.